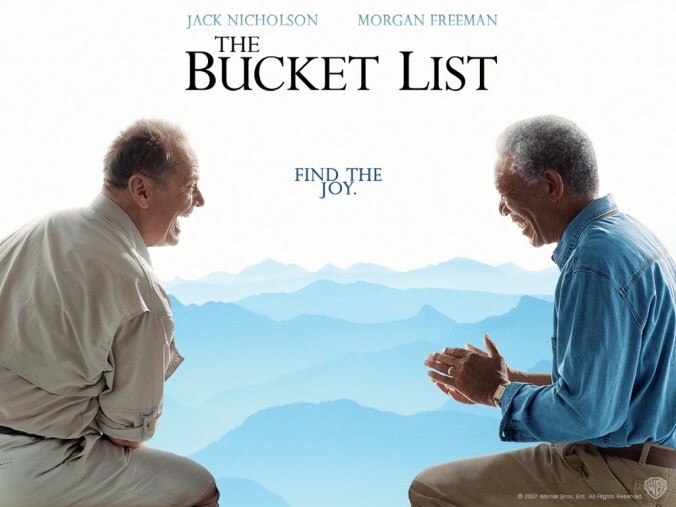 The movie ‘The Bucket List‘ was released in 2007. It must have been released in India as well but I had missed it. I accidentally saw that film about a year ago. And I was simply blown away. The movie neither had sex, action, special effects, animation typical of Hollywood films nor masala or formula like our Bollywood films.

Then what was special about the movie? I felt the movie was must see for a wonderful message it gives you and makes you think whether you can implement that in your own life. I am not going to talk about the nuances of the film like story, acting etc. Many people have written about it anyways.

What do we mean by Bucket List? In colloquial English, there is a saying about the death of the person and that is – To kick the bucket -. Hence it could mean that bucket list is list of important things written down before death. Normally nobody creates such list. There may be many who prepare a will. But bucket list does not mean will. A ‘will’ specifies how that person would like his wealth to be distributed. However bucket list is list of unfulfilled wishes & desires of the person who is still very much alive. It could be anything, may be too far fetched as well e.g. Climbing Mount Everest.

That set me thinking. How much do we really live for ourselves? Loads of responsibilities, day to day challenges, monthly EMI’s, growing up kids, parents & their health issues, so on and so forth sucks the life out of us and one fine day, we suddenly realise that our life is on the last legs. And then it daunts on us that we have hardly lived and there are so many unfulfilled dreams.

I remembered my friend Paresh asking me three questions about totally different context of financial planning.. The questions were

1. If you are financially secured, how would you lead your life?

2. If specific time frame is given to your life, say 5 or 10 years, what would you change?

Then I suddenly remembered a scene in the movie in which, while visiting Egyptian Mummies, Carter Chambers (Morgan Freeman) is telling Edward Cole (Jack Nicholson) about the two questions asked of the dead by the Gods at the entrance to heaven:

1. Have you found joy in your life?

2. Has your life brought joy to others?

And that struck me like lightning. Whatever so called bucket list I had made, everything was related to travel and boiled down to having money. All that was actually possible as luckily I am blessed to be in that position. But will that bring joy in my life? It would definitely give me a sense of achievement but that’s it; nothing beyond that.

There is so much joy in small bits in our every day life but by waiting for, that so called big joy, may be we tend to overlook them totally.

Unfortunately we have lost the spontaneity in life. We get afraid with the word freedom as we tend to associate that with irresponsiblility. In fact it’s the other way round. We only talk about wanting to have freedom but in reality we don’t want freedom as we don’t want to take the responsibility of its consequences.

What I felt was if I am able to live life, moment to moment fully, it should be full of joy and happiness.

Now coming to the second question of whether my life has brought joy to others. Frankly I don’t know. Even though whatever I have done is mainly for the family, many a times, I may have taken them for granted. But what is the harm in starting afresh even now?

Further some may feel why create such list as we are not dying tomorrow. Agreed, but it is not necessary to get premonition of death to prepare such list but the point is whether we will be able to fulfill our dreams and desires after few years when we are much older? Then might as well start in that direction today so that there is no regret later in life.

2. Live discreetly for 3 months in an unknown place

3. Make a difference in lives of 5 people, preferably underprivileged..

I seriously believe that every person should think about his/her own bucket list and go for it whenever one can.

Yeshwant,
Very well written. We are all Champions of “ misplaced” priorities. Every once in while when one reads Post’s like yours, it’s a reminder to get moving and not push or keep aside the desires for another day, but to do something about them earlier than later.

Nicely written. But you know something? I don’t think I have a bucket list. I try to live as much as I can right here, right now, the way I want. Of course one had to adjust and prioritise things in life when one had a family, but that hasn’t made me make a bucket list…

Too good yeshwant, what will make one happy is difficult to put in words, its the experience you get while doing something ,you suddenly feel relaxed and joyful. Thats what we should pursue now.
Well written Yeshwant, keep writing, I think tjis is what you enjoy now.

Very well & nicely written.
Yeshwant, you surely have knack of writing precisely & to the point.
This one is no doubt thought-provoking.
I saw Madhuri Dixit’s Bucket List which was based on similar theme.
Your each blog is better than the earlier one.
So you can look forward to a bright career in writing.
More power to your elbow. Keep writing. Congrats again.

Thanks Abhay.. I like the wording “more power to my elbow”.. I do intend to write further but bright career in writing is little far fetched.. But yes, appreciation from friends like you will give me that extra impetus to do something more..