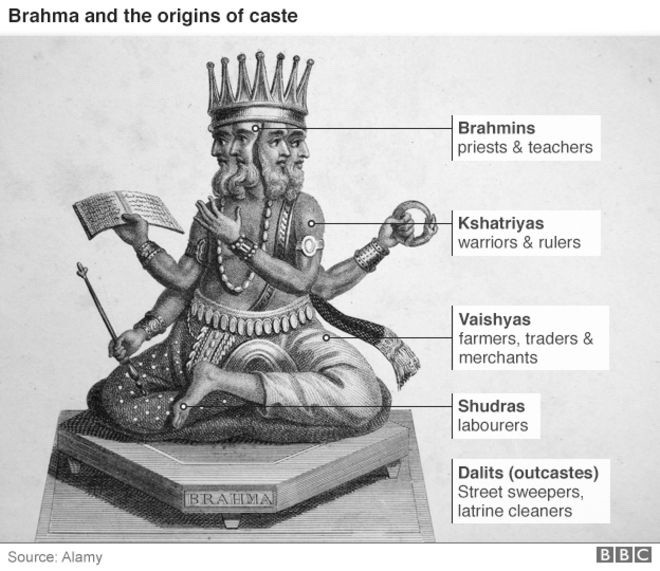 Today even if you utter the word “caste”, everybody around you are vociferous in offering their opinion. It is popular belief that caste reforms is one of the biggest hurdles in the restoration of the Hindu religion and that is true to an extent.

Before we get in to the debate of whether the caste system is good or bad, it is worth noting that there must have been some merit to it, given that this system has lasted for thousands of years. In our opinion, the most offensive aspect of the caste system is the “higher-lower” belief that we have created. Unfortunately it is extremely difficult to get rid of his notion completely because man at his core is egotistic. As long as this nature was not self-destructive to the society, the general structure of the caste system was once and to an extent even today useful.

We have tried to understand the origins behind the caste system and concepts like untouchability from a historical perspective and this article is a revelation of those thoughts. We have also supported this article with our personal observations. We cannot deny the possibility of error in our understanding. Similarly this article may not be as relevant in the entire country as it is constricted to be within the boundaries of Maharashtra. Tracking and condensing the origins of caste system across India in an article would be impossible and it would end up becoming a research paper rather than an article. We were even forced to split this article into 3 parts.

The caste system has become an inseparable part of India’s social structure. It is unimaginable to think of India’s diverse culture without binding it within the spheres of the caste system. While we may tend to believe that the caste system has come under heavy criticism only post-independence, that is not true. It is worth noting that Buddhism, whose origins date back to 500 BC, evolved due to rejection of prevalent caste system in India. Back in those days of Vedic religion, the concept of Yagna had caused a massive rise in violence (animal sacrifice) and the Brahmin caste had attained reverential status. Kshatriya kings supported these events. In fact these kings owned a lion’s share in performing Yagna as they were the only ones who had the wealth to perform such rites. From that perspective, Yagna was beneficial to both Brahmins and Kshatriyas.

Now let us try and look at this from a different point of view. Shri Madhukar Keshav Dhavalikar has covered the environmental aspect of Yagna in his book on the Harappa and Mohenjo Daro civilization. In his book he states that between 2000-1000 BC, the amount of precipitation (rains) had decreased in the Indian hemisphere. Rivers had begun to dry up and geological changes were causing rivers to change their course eastward causing the end of the Indus civilization. Beginning 500 BC to 500 AD, this millennium brought back rain and prosperity to the Indian hemisphere; trade increased. In his book he has provided ample evidence of this hypothesis. Based on these findings we can surmise that once a civilization becomes healthy and prosperous, it also creates an environment for neglect and corruption to breed. This prosperity and well-being has distorted the true format of the Yagna as described in the Bhagwad Gita. The law of nature dictates that excess of something begets an equally opposite reaction. The birth of Buddhism was the reaction to the abuse of the prevalent caste system. That is the primary reason why Buddhism rejects Vedic religion. If you closely observe this period of time, you will notice that emergence of many big empires. Chandragupta Maurya established the Mauryan Empire during this very period of time. Gupt Empire was also established around 300 AD. If you study Buddhist literature you will realise that at the zenith of its evolution, traders had the highest stature. Charity was revered more than Yagna. Likewise, the importance of Brahmins diminished. Many Brahmins in fact became Buddhist monks and substantiated Buddhist philosophy.

1. The most revered and sacred hymn of Brahmins, the Gayatri Mantra, was written by Vishwamitra who was born a Kshatriya and who chose lead his life as an ascetic eventually become a rishi.
2. Maharishi Vyas, who compiled the Mahabharata and all the Vedas was the son of Rishi Parashar and whose mother Matsyagandha, was the daughter of a fisherman.
3. Rishi Valmiki who compiled the Ramayana was born to a fisherman family by birth.

All the above examples highlight that in the ancient days when the caste system evolved, a man’s character indeed defined him and not his birthplace.

Of course there are some among the intelligentsia who will quickly point out the examples of Dronacharya and Ekalavya. Our response to that is the famous teacher of the Kauravas and the Pandavas was a personality that arose out of disarray. Dronacharya was born and raised a Brahmin who rejected being a Brahmin and chose to be employed by the Kuru Clan. The essential virtue of a Brahmin, forgiveness, was easily forgotten by his enmity against King Drupada. Similarly, there were rules surrounding the knowledge of the Brahmastra. An individual who has control over his emotions was the rightful owner of the knowledge surrounding the use of the Brahmastra because in all its essence the Brahmastra was no less than an Atomic Bomb. Dronacharya disregarded this sacred rule under the guise of love for his son and imparted Ashwathama with this secret power. The disaster that happened because of this is well documented in the Mahabharata. Dronacharya adopted the Kshatriya dharma and hence Dhrishtadyumna, the son of Drupada did not incur any sin when he killed the Brahmin born Drona. That is why the example of Dronacharya and Ekalavya is an exception.

It is the general belief that Casteism only exists within the sphere of Hindu religion. Here are some examples that negates this idea:

Once we met an elderly gentleman named Lopez near Vasai. While conversing with him, we enquired about where in Vasai he resides. To this he replied that he was a Samavedi Brahmin and lived in the Christian area opposite to the Brahmin neighbourhood in Vasai. He added that they even practiced marriage within their own Samavedi Christian community. We were dumbfounded after hearing this.

Similarly we once met a Muslim lady who was born a Rajput but she had no qualms in saying that her husband was from a lower caste.

Once we had the opportunity to be hosted by a Muslim family in Hyderabad. The hostess was of Pathan origin and her husband was a Muslim born in UP. In the midst of our conversation she said jovially, “We Pathans, value our word over our life. The bonds between Pathans and the Marathas are old and strong. We Pathans don’t change our loyalties with the course of the wind like the Muslims of Northern India”. She must have said this as she was aware that during the famous battle at Panipat, Bhausabheb Peshwa’s master of artillery was Ibrahim Khan, a Pathan who fought with the Marathas till the very end.

Hence, generally speaking, every Indian is integrated in some form in to this caste system and every individual is loud and proud of his origin. Even if you change your religion, who still hold the virtues of your caste.

We will see how the castes must have originated in the part 2 of the article.