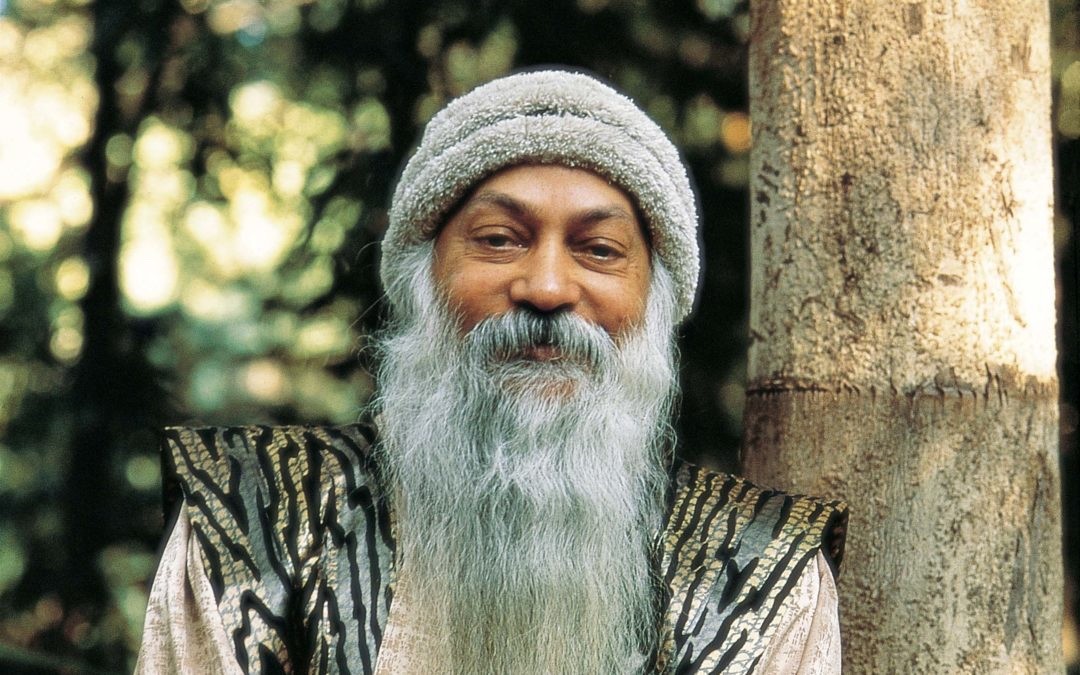 (This article is my understanding of Osho, the philosopher. There are some aspects of his personal life which are controversial and have been covered in the Netflix series – Wild Wild Country. The purpose of this article is to only deliberate about his philosophy.)

Chandramohan Jain sounds like a fairly nondescript name, doesn’t it? However, if I addressed him as Acharya Rajneesh alias Osho is sure to get any reader’s or listener’s attention. Chandramohan Jain is nobody but Osho himself with his characteristic penetrating gaze, pleasant disposition, sadhu-like prolific beard, silky voice and his teachings of peace and philosophy, in today’s materialistic world, in simple layman’s language.

Though Acharya Rajneesh or Osho is not really known to the current generation, for those in their fifties or older he remains a thought-provoking, soul-stirring never-ending enigma. From among all the spiritual leaders and philosophers who have been, Osho’s aura shines just a tad brighter. His impressive personality, avant-garde ideologies, mind-boggling lifestyle and a narrative which has a touch of the supernatural are among the many things that have captured the hearts and minds of those who are on the path to seek inner peace.

Liberation and freedom were Osho topics of choice for his speeches as well as spiritual contemplation. He staunchly opposed socialist ideas, Mahatma Gandhi’s ideologies as well as the regressive society that laid down strict restrictions under the guise of religion.

There are typically two schools of thoughts in the context of Osho. One set of people are those who worship Osho, his followers and his disciples. The others are those who do not believe in his ideals and think he is a fraud. But then there is another set of people like me who are greatly influenced by his revolutionary thoughts but do not identify with his personal lifestyle.

How do you address Osho? Religious Leader, Saint, Teacher, Incarnate, Bhagwan (God), Messiah, Preacher, Anti-religion or Sex Guru? For those who do not know Osho or have slight knowledge of him could categorize him in any of the above buckets.

Osho’s steadfast revolutionary ideas had shaken self-righteous leaders across the world. When a person decides to read an Osho book, he is often told to go ahead and read the book but to not take Osho’s teachings too seriously. I find this very funny. Then there are also those who say that Osho will shred every belief you hold about spirituality and society to bits. He is like a short-circuit.

Sometimes, it feels like his ideologies still continue to be a force to be reckoned with for those in power. Here is my attempt, after much study, at defining a few of them.

1. Opposition to Mahatma Gandhi: Osho has staunchly opposed Gandhi’s ideology in most of his sermons. He stated that such an ideology is regressive as it is quite self-destructive. According to him, Gandhi revered the Geeta, but could never fully accept it because he could not justify the concept of war within the confines of his ideology of non-violence. So Gandhi very cleverly asserted that the war of the Mahabharata was nothing but an allegory and never actually took place.

2. New Age Sanyaas: Osho came up with a whole new kind of Sanyaas where a person can become a Sanyasi and still stay with his family and live a normal life. It involves no sacrifice or escapism but strongly focuses your attention on your inner self making one’s life better and more creative through meditation. To Osho, Sanyaas essentially means living a normal life while remaining aloof and detached like a lotus, unaffected by past memories and fearless about what lies ahead and living every moment to the fullest. It does not require wearing saffron robes, following strict rules, chanting, performing pujas or even praying. Having said that, daily meditation is a must! According to Osho, a true Sanyaasi is one who meditates and thrives in good company while living with family and fulfilling all social and traditional responsibilities. He says this is how Sanyaas was for thousands of years in our country. Abandoning home and family, donning saffron robes and renouncing the world is nothing but escapism.

4. Futility of Family: What is probably Osho’s most controversial ideology is making the institution of family redundant and introducing the concept of commune living. He states that if family does not exist, the concept of marriage is bound to take a backseat. Marriage plays a pivotal role in today’s society, which according to him should be played by love. People assume that two separate beings will form the bonds of everlasting love just because they are married. Osho says this assumption is completely baseless and untrue but unfortunately we have not understood this for the past thousands of years. Just how blind are we! Being bound can never lead to love because love is all about freedom.

5. Worthlessness of Religion: According to Osho, we have had hideously wrong, completely baseless and downright false theories, opinions and beliefs shoved down our throats for centuries. Our actions are rarely aligned with our intentions. No religion or religious leader ever wants you to truly understand yourself or your own inner self because it is only when you start this quest in search of this truth, you are released from all these religious bounds.

6. Pointlessness of God: According to Osho, if there is a God, then the baggage of karma (good and bad), heaven & hell, prayers and rituals, pujas and ceremonies, religious conversions, religious scriptures, temple, mosque, church are sure to follow. It is impossible to understand the concept of god without the guidance of gurus and religious scriptures. He believes that God is not an external reality, but is recognising the divinity within us.

8. Trust Nothing, Question Everything: Acceptance of something just because it is dictated by religion or science is just not going to work anymore. Osho talks about questions, not suspicions and believes that the only way to the truth is through asking questions and clarifying queries. Reverence and belief will only shackle you, while asking questions will set you free.

9. From Sex to Superconsciousness: It was essentially Osho’s spiritual and philosophical ideas about sex and intercourse that made him known to people or notoriety among them. In 1968, he caused quite a stir in the country by delivering a series of sermons titled ‘From Sex to Superconsciousness’. It was during a time when even kissing in movies was frowned upon that this maverick shared his rather unique and revolutionary ideas on sexuality.

India is characterised by a society in which there exist the contrasting realities of a crazy attraction towards sex and perversity resulting into crimes from the same and a vehement opposition to anything to do with sexuality. The primary reason for such disparity is the imbalance between expressing and regulating emotion. Saints and religious leaders always said, “Don’t do this.. Don’t behave like that” but this led to the suppression of natural feelings but nobody taught us how to create an outlet for these emotions.

He put forth that sex is not merely a physical act, but it is also a path to spirituality. What do you define as meditation or a meditative state? It is the state when our mind and brain experiences thoughtlessness (zero state), remain unaffected by any internal or external stimuli and we live only in the present, fully absorbed in that moment. A person attains this state at the peak of intercourse. That is what Osho described as being in a meditative state. This state is divine energy itself. He who completely understands this moment of nothingness, of complete awareness, can experience Samadhi.

Osho believed sex to be a most natural and inevitable act and always encouraged it. Generally speaking, all religions in the world strongly rebuke sex. Celibacy is generally a pre-requisite to joining any cult or becoming a Sanyasi. However, Osho’s Sanyaas begins only after one has fully indulged his desires. Sex is the first ladder that finally leads to final rung of Samadhi. Osho suggested adding obstacles before permitting marriage and making the law around divorces simple. But this is the exact opposite of our system today where it is easy to get married but extremely complicated to end it.

Viewpoints of Osho on Sex:

* Brahmacharya is not the opposite of sex, but is a transformation of sex. Anybody opposed to sex can never attain Brahmacharya.

* Any country that accepts sex easily is bound to have clear channels of productive energy which in turn will contribute to its progress.

*  A married couple or partners must enjoy sex at the same degree of happiness and peace they experience when they visit a temple because the act of sex is akin to going through the temple of the divine.

The renowned scholar Shivajirao Bhonsle once said that Osho deserves a Nobel Prize just for his ‘From sex to Superconsciousness’ series of sermons.

But how will those in power ever accept this ideology? Nobody would dare to as implementing such ideas would mean shaking the very foundations on which we have built our ‘civilised’ society.

Osho had to brave many storms throughout his life. A likely reason for this could be his radical thoughts and ideologies that were way ahead of their time. Now, in the 21st century, we have all kinds of material pleasures at our disposal. However, we are still plagued by a certain hollowness within and stress levels that are through the roof. The world needs to realise that Osho’s ideas and meditation could be a great solution to overcome this internal strife and lead a creative and full life.

Many books were written based on his thousands of sermons. He beautifully incorporated enlightened souls like Mohammed, Krishna, Jesus, Buddha, Kabir, Mahavir, Nanak, Lao Tzu, Mirabai, Sahajo etc. in his discourses. This honestly makes it difficult to read all his literature. But for those who may have been able to read even a little about his teachings, would acknowledge that he completely changes your perspective of looking at life. If I am ever asked what I took away from Osho’s teachings, it would be –