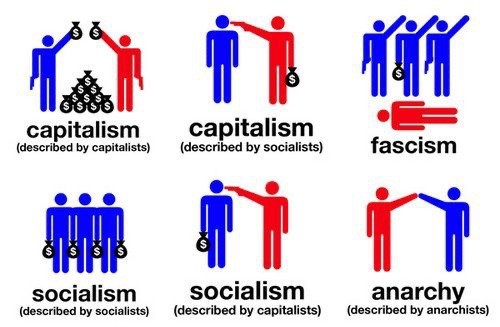 Every human being desires an atmosphere of justice, happiness and contentment to exist in the world. One expects to fulfill one’s basic needs and to be happy. If such a human being is active, then he will try to create such an ambience according to his intellect and strength. The collective form of all these efforts is the creation of various “isms”, for example, socialism, communism, capitalism, secularism, etc. Among the followers of these isms, those who are intensely intelligent create a political system of these ism’s and thereby try to establish an ambience of justice and contentment in the society. But in my opinion two important points have been lost in this entire process. They are: 1) human mind and 2) the reason why human beings behave selfishly and wickedly is never figured out.

Therefore, if we study the history of the last few centuries, it is noted that all “isms” have failed probably for this very reason, may be communism in Russia, socialism in Europe or socialism based secularism in India. Till date, we had believed that Epitome of successful capitalism was America. Many capitalists have succeeded in selling the idea to the masses that Capitalism is the most appropriate path for economic prosperity and hence nation after nation is trying to implement this American dream. But is it really so?

The racial riots presently happening in America have turned ugly and it has exposed a dark underbelly of American Society.

The important point to be noted is that this is not the first time that such riots have taken place in America. A few years ago, when there was a huge blackout in America, due to a problem in the electricity grid, massive looting had happened in New York city. They were and are the ferocious outbursts of dormant but smouldering public anger. America is a rich and developed country which is considered to be Superpower and therefore the question arises as to why is there so much rage?

If the lifestyle of the original inhabitants of America, those with fair skin and blue eyes, is studied, we realise that they are generally less educated. They do not get any family support after the teenage and have no option but to work. The Technological Revolution changed the American work culture but very few of these people could get benefit of the same due to their limited education. Indians and Chinese established their dominance in these fields. Therefore, these people were left with no other option but to do odd jobs. However the influx of Mexican immigrants robbed them of such jobs as well as these immigrants were ready to work even at half wages. So these Native Americans were throttled by both sides.

The coloured people of African descent were enslaved in America for almost two and a half centuries. The slave owners subjected these people with some gruesome experiments to produce robust progeny of slaves. These blacks were forced to reproduce like animals. As a result, some genetic defects seem to have been transmitted to these people as there is something amiss in their way of thinking. Today, from experiments it is seen that they lack the ability to solve logical problems. A survey of fire department personnel, conducted 10-12 years ago in New York, revealed some shocking facts. Blacks were employed very rarely in that department. When some people probed further, a shocking fact came to light. There were some logical questions deliberately inserted in their exams so that they would not be able to solve them as they lack the mental ability to solve such problems. This clearly shows that, even though slavery has been outlawed few centuries ago, they are always treated as second class citizens.

In the last few years, the wealth gap between the entrepreneurs, the highly educated working class, the middle class and the lower class has kept on widening. You may not recollect, but there was a movement called “Occupy Wall Street” in New York in September 2011. At that time all unemployed and people of low income group took to the street to protest against this widening gap. And today the same fight pops up again under the banner of “Black Lives Matter”. So now the conflict is now between, the “haves” and the “have-nots.” There are serious doubts being raised whether this is the first sign that capitalism in America is under threat. Or will it also fail like other ism’s of the world, under the weight of this racial and economic conflict?

Then what is the way out? If all isms/ philosophies failed, then what we might face in future? Inequity, chaos and dictatorship?

If this is to be avoided then a new philosophy will have to be invented which will follow the path going from individual to masses; because happiest society will be the one that has large number of happy people. More the number, happier will be the society. It seems that, all ism’s so far, have tried to reach from masses to individual and may have failed because of that.

If peace and order is to be established in the world, then it is important to change the attitude of people, as a good ruler would be born in a healthy society only. That would be the key to successful democracy.

Change of religious thoughts, political thoughts and systems were reactions to abuse these two types of thoughts done by religious leaders or monarchs. Let’s peep into history. Now what’s in future ?