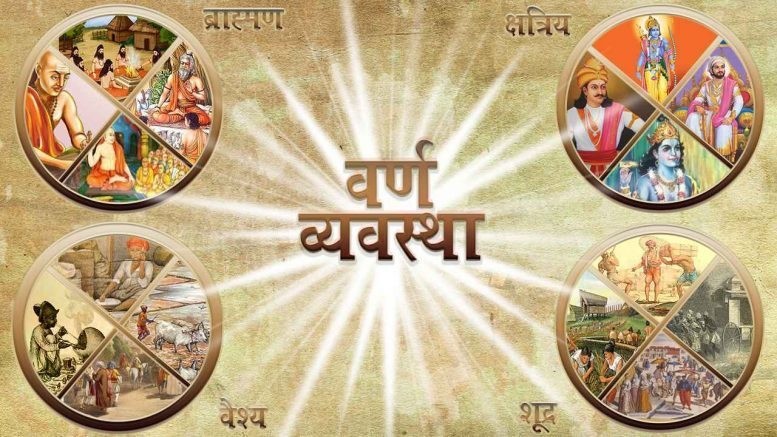 How did the Caste System Originate?

Agricultural land was the medium on which society was established and village boundaries were established. Man started settling in groups within these villages. This led to the awareness of collective needs of the society and led to the emergence of business. Everybody had the independence to choose any business that they felt passionate about, had the skills to execute and had the physical strength to perform. This led to 12 distinct occupations – Carpenter, Blacksmith, Mahaar, Maang, Potter, Cobbler, Washer man, Barber, Bard, Oil Trader, Priest, Fisherman. Some of these occupations may change depending on the geographical location of the village but each village needed these 12 distinct occupations. Beyond this, there were 18 other occupations that 2 or more villages shared in common, e.g. Betel Leaf Seller, Weaver, Gardener, Watchman, Goldsmith, Tailor, Artists performing “Gondhal”, Butcher, Artist etc.

All the above occupations divided the people of the village in to different castes. Even today some of the names of castes we hear (excluding sub-classes) are in fact synonymous to actual occupations. Here are some amusing examples of how castes originated from occupations:

1. There is a caste in Maharashtra called “Nandibailwaale” (Herders of the “Nandi bull”). These people travel villages with the Nandi bull. But there is a ritual that resulted in the origination of this caste. Ancient farmers of India always owned cows and bullocks. There was an established a rule back in the day which stated that the bull who mated with the cow which yielded the highest quantity of the milk in the village should be attended to by the entire village. Such a bull was called the Nandi bull. This bull was also used for procreation across the village with the assumption that this will aid in high quantities of milk across the village. Even today, artificial insemination exploits the same underlying principles. However, if the Nandi bull is used only for all cows in the same village as all the offspring will end up having the same gene-pool and can lead to abnormalities. We must admire the forward thinking minds of your ancestors. Hence a system was formulated that the Nandi Bull from other village would be brought to our village and our bull should be sent elsewhere. To maintain the upkeep of Nandi bull and taking it across villages gave rise to an occupation in itself and centuries later transformed in to a caste. In today’s world these antiquated practices are not followed and hence this caste is now associated with the “Bhatkya” caste.

2. The blacksmith designs tools for the farm as well as creates weapons like swords and spears. Some people acquired the sharpening skills for such tools and such people even today travel across villages and towns offering services. Such castes are called “Salgar”

3. There is a caste called “Kevat” in the northern parts of India. Their occupation is to transport people from one end of the river to the other. Even the “Ramayana” speaks of this caste. When Lord Ram wanted to cross the Ganga (Ganges) during his Vanvasa (forest dwelling), he requested the help of a Kevat. The Kevat agreed to this one on condition: he will help him cross the Ganga but in return he asked Lord Rama to navigate him through the river of Life to reach emancipation. This caste does not exist in Maharashtra as the rivers are not that wide. Both the rivers Godavari and Krishna become wider once they cross the borders of Maharashtra.

Geographical changes, some specific events, rituals, migration, etc were some of the reasons for the origination of sub-castes. Two amusing examples regarding this:

1. After defeating Ravana, Lord Rama returned to Ayodhya. On his arrival some of the Brahmins told him that he will have to perform penance for committing the sin of murdering a Brahmin (Ravana). The great Lord Rama had to succumb to such thoughts. (Indeed, the people of Ayodhya troubled the great Lord Rama more than Ravana himself) After performing Yagna for his penance, Lord Rama offered meals of the all the Brahmins. Some arrogant Brahmins refused his offering. Those who accepted his offering were banished by these arrogant Brahmins to the other end of the River Sharayu. The descendants of such Brahmins even today belong to the sub-caste called “Sharayupaari Brahmin”.

2. The first Bajirao Peshwa had appointed several of his trusted generals in northern parts of India to create a militaristic vantage point. For eg. Shinde, Holkar, Pawar, etc. Similarly he had named Govindpant Kher, a Karhade Brahmin as the protector of the fortress at Bundelkhand. As time passed, the last name Kher disappeared and he was only remembered as Govindpant Bundele. He was responsible for the migration of many Karhade families to the Saagar region. This region
was quite fertile and over time these families became very wealthy and considered themselves as n “upper caste” among the Karhade Brahmins. Even today there is a sub-caste within Karhade Brahmins called “Sagarian Karhade Brahmin”.

How the birthplace may have defined one’s caste?

1. Need – When a society is being established, needs of the society and household are created. To fulfill those needs the society may have been divided up in to groups. Every individual may have associated with a group based on his/her skill-set. Such people based on sheer human nature may have felt the need to pass on these skills to their future generation in order to continue to remain successful in the society.

2. Genetics – The high probability of the skills and art being propagated to the offspring due to genetics could be a possibility. This may explain why the child may choose to grow their parents business. Such practices are prevalent even today in many fields. e.g. Doctors, CA’s etc.

3. Business Values – In the past, the household was located very close to the business. Children born in such a business-oriented household pick up many skills easily and hence it becomes easier for a child to accept their family’s business.

4. Marriage Establishment – When a woman gets married, she leaves her parent’s house and moves in to her husband’s house where she has to undergo a massive transitive phase. If the environment and values at the parents and in-laws are similar then the marriage has a higher chance of success and longevity. This may have been the motivation behind marriages within the same occupations. As both mother and father belonging to the same occupation will impact values to the child, the possibility of the child also pursuing the same occupation is even higher.

The above examples coupled with the fact of low population and poor transportation facilities, can help us understand how the caste system may have been chalked out on the basis of birth over three thousand years ago.

Marriages within castes are prevalent even today and due to this age old practice many castes have developed unique traits of their own.

1. Strongly arguing to uphold principles (truist), spending hours on researching things / helping others in spite of no sign of monetary gain are some of the values/demerits of Chittapavan Brahmin. However these are the very principles that made them leaders who fought against the British, revolutionaries, historians and archeologists. Even today, many individuals belonging to the Brahmin caste will be inclined to/pursuing occupations involving calculations eg. Accounting, teaching, finance, engineering, etc.

2. The Bhandari family from the Konkan area is known to be brave but very angry and bickering. It is said that it is not a true Bhandari wedding unless there is a big fight. One of the primary occupation in this family is making of “Toddy” (Tadi), a native drink. Arguments are an inseparable part of this business and hence an argumentative behavior is a part of their personality. Also, to prepare toddy one needs to climb the tree and for this purpose, one needs to be supple and strong. This strength comes in handy in a good fight.

3. The “Ramoshi’s were renowned for being protecting the villages and the people at night by keeping vigil. Courage and a strong physique are a characteristic trait of the Ramoshi’s. Bahirji Naik, Shivaji Maharaj’s military commander belonged to the Ramoshi clan.

Chatrapati Shivaji Maharaj was able to utilize these character traits of different castes in his effort to achieve “Swarajya”. There were three people who handled the daily affairs at every fort; The Killedaar who was born a Maratha clan, the arms and food administrator who was from the CKP (Chandraseniya Kayastha Prabhu) clan and the general administration was handled by a Brahmin. Most of soldiers in his army were Ramoshi’s, Berad, Mahar, etc. His navy consisted of Konkani Muslims, Bhandari, Koli, etc and his commander-in-chief was a Maratha.

No single community/caste has monopoly on all kinds of values or demerits but it may be safe to say that belonging to a certain caste may potentially indicate certain character traits. Let us take a look at one example to fortify this statement.

We once asked a sculptor what caste he belonged to. We asked this because many sculptors or artists to design the Ganesh idol typically belong to the goldsmith clan. Craftsmanship is something they have inherited through many generations. The sculptor said he belonged to the Panchal caste. This caste includes blacksmiths, carpenters and three other occupations. Our next question was which sub-caste among Panchal did he belong to? His answer was blacksmith. Then we asked him what kind of occupations did his grandparents and forefathers do? He said they used to make armor for the militia. This helped us in understanding why he chose to become a sculptor. Making armor and weapons needs a good knowledge of the human anatomy and some of this knowledge must have been passed down through generations. His current occupation is simply translating this ancestral knowledge of the human anatomy into a statue form.

It is not possible to list down personality traits and skills of every caste. Only some of them have been cited in this article.

The article on Caste System can not be complete without touching upon the issue of untouchability. We will take that up the final part of this article.