My friend’s son told him something in 2003 which confused and horrified him in equal measure.

Being from a business family, he expected his son to follow in his footsteps and take over their successful manufacturing business. When the son entered the 12th standard, he told my friend that he was not sure whether he would like to pursue engineering or not. He went on to add that he would like to take a break after his HSC to figure out what exactly he wanted to do. My friend didn’t know what hit him and he felt that his son had let him down.

He immediately rushed to me and pleaded with me to convince his son of such foolhardiness. I calmed him down and told him that he should be happy that his son shared with him more as a friend than a nagging father. Frankly, I was fully aware of what it feels like not pursuing what you like and I always told myself that I must help my children pursue their dreams as I wouldn’t like them to blame me even once for not allowing them to do what they wanted.

But since my friend was feeling bad, we decided to think through this concept proposed by his son.

India’s education system is like a straight jacket. The process of competing with thousands of other kids for a single spot in IIT or IIM is what keeps us focussed. We, as parents, want our children to crack the IIT JEE or MBA CAT so that their future is secured. (To illustrate the mad rush, even during the raging pandemic, nearly 8 to 10 lakh students appeared for JEE). We can not ensure what our son or daughter will do in future, whether they will marry or not, so we tend to push the security box; get a professional degree for an excellent paying job.

But it doesn’t have to be this way. Not every kid has to be blinkered to become an engineer and/or MBA. Even if they do so, it may give them no joy. I remembered my other friend’s son who wanted to become an engineer. Still, just because he was getting admission to IIT, Mumbai, his parents, in a way, forced him to take any available discipline. He took Metallurgy and completed his studies, but he cursed himself every day looking at the mirror – what the xxxx I am doing?
Skipping that professional degree to pursue a passion is entirely unheard of. But today’s times are turbulent, and straight-line thinking about a career is a sure shot recipe for disaster. Today youngsters switch jobs like towels, and they are unlikely to stick to a single career through a lifetime. The way of joining the Tata group as a trainee and retiring after nearly 40 years of service is a thing of the past. Hence even if the youngsters become engineers to satisfy their parents, they might do what they want. Actor Madhavan and Tapasee Pannu are engineers, so are cricketer Anil Kumble and stand-up comic Kanan Gill.
Technology is creating new jobs which are beyond our imagination and making old jobs redundant. The future needs young adults who are creative and adaptable and not pre-programmed robots.
Unfortunately, our education system runs on built-in tunnel vision. It doesn’t teach kids to think for themselves. Hence the students hurry to earn degrees out of habit or parental pressure. However, the pressure may make one perform, but it can also blinker with one’s vision. Our high schools shut out everything but academics. Maybe the young adult they are moulding into an engineer may want to become a chef or a writer.
However, we as parents and our overall system hate wasting anything, and we think of a break in a young person’s education – a gap year – as time wasted. Youngsters rush down the default path without questioning it.
But wouldn’t it be nice to let young people discover who they are? A gap year is when one lets the pressure off and allows them to explore their real interests. Try out new things, learn new skills and discover themselves. A gap year allows a youngster to make an informed, independent decision. They might understand their internal machinery and be able to put their finger on what makes them tick. They tend to waste four years to save one. But changing track later would waste those four years as well. 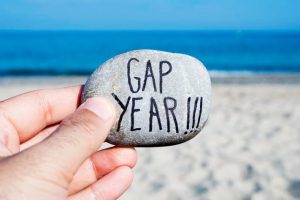 There is no guarantee that a gap year will reveal the youngster’s true calling. Or that they won’t change their minds. But at least parents will be treating an adult as an adult and making them responsible for their future. In the process, the youth may escape the rut and discover true joy.
After a lot of cajoling, my friend very reluctantly agreed to listen to his son and allowed him to take a break. Finally, to complete the story, my friend’s son did Masters’s in Economics instead of engineering as his well-thought-out decision and today he is a very successful investment banker in the US; and most importantly he is very happy.
@ Yeshwant Marathe
yeshwant.marathe@gmail.com
Inspiration: Article by Chetan Mahajan