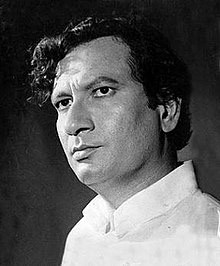 I have heard that Goldie liked Guru Dutt’s realism, Raj Kapoor’s glamour and the philosophy in the works of Satyajit Ray. But as a filmmaker he never ventured to make realistic movies. He had said “This is a media for entertainment!”

Ask any director who he’s been influenced by and Goldie’s name will feature notably in that list. Because he was not just a textbook of cinema; he was an entire curriculum. He was not limited by any genre or even his own sensibilities never hindered him as he could easily dash through comedy, thriller, drama, musical and even masala fare with ease. His directorial excellence was as much about his deft camera work as it was about his distinctive characters. Waheeda Rehman in Guide, despite playing an adulteress, went on to become an iconic symbol of rebellion. Vaijayantimala went notches further as a dancer after she kept pace with his trailing camera in Jewel Thief. Shammi Kapoor became India’s answer to Elvis Presley as he matched Goldie’s vision of a rockstar in Teesri Manzil. And Mumtaz draped her sexuality in homely cotton sarees to give her best performance in Tere Mere Sapne. However Nutan and Waheeda Rehman remained Goldie’s favourite actresses.

For many young Bollywood film-makers, “Goldie” is Boss. They speak with awe of his storytelling skills and his mastery in shooting song sequences. Some make their infatuation quite clear: Sriram Raghavan’s Johnny Gaddar is dedicated to him and peppered with hat tips to Goldie. This is serious respect from a film-maker trained at Pune’s Film and Television Institute of India (FTII), one who would be expected to admire Ingmar Bergman, Akira Kurosawa and Satyajit Ray. But while Raghavan and his peers would have watched the international giants, it is Goldie’s songs that they must have seen again and again, to learn the language and idiom of the commercial Hindi film. After all, it was in the Bollywood, that they would be working. And observing Goldie’s work closely would definitely help.

Though he directed 16 movies, it was in a seven year stretch that he made five extraordinary films that really consolidated the Goldie cult among his fans. While Nau Do Gyarah and Kala Bazar are full of entertaining moments and terrific songs, they are too distant to evoke any memories in those who came of age in the 1970s. But those five films — Tere Ghar Ke Samne (1963), Guide (1965), Teesri Manzil (1966), Jewel Thief (1967) and Johny Mera Naam (1970) — remain in the collective memory of an entire generation of fans and film-makers.

Someone could actually write about the impact of those five films. I remember our entire family watching Tere Ghar Ke Samne, sheerly for it’s songs every 3 months by hiring the video cassette. Teesri Manzil, Jewel Thief and Johny Mera Naam were our favourites films to watch, by bunking the college and even today they remain as my all time favourites. All these films with great songs and fantastic editing (by Goldie himself), which gave no chance to the viewer to think or even bat an eyelid. We friends must have watched these 3 films umpteen number of times without getting bored even once. The greatness of Goldie lied in the fact that Teesri Manzil or Jewel Thief had repeat audience even after mystery was known. Guide was a very intense film way ahead of its time, with live-in relationship et el. And the finest compliment for Goldie came from RK Narayan who said, “The film is more beautiful than my book.”

A film that remained close to Goldie’s heart was Tere Mere Sapne (1971, based on AJ Cronin’s The Citadel). He was hurt that the ‘sensitive’ film was not a commercial success. It was the story of human relationships amidst materialism. Goldie had met number of doctors to understand the authentic body language for his doctor protagonist.

I have heard a story of Goldie’s large heartedness. Amarjeet, who was a publicist and Goldie’s friend, lived in Chetan Anand’s shack with Goldie. Once, Goldie fell sick and Amarjeet nursed him with affection. He’d serve him soup, press his legs, check the temperature. Goldie promised him a directorial assignment. Goldie wrote a detailed script of Hum Dono (1961) with everything marked.. entry, exit, camera placement.. so that Amarjeet wouldn’t face difficulty while directing. But yet Amarjeet couldn’t do it. Finally, Goldie directed the film but gave Amarjeet the credit that he had promised him.

Goldie’s songs too outlived his times.

Love scaling heights in Dil ka bhanwar.. a beautifully filmed song. It was shot in the Qutub Minar to get the feel of Delhi. The duo (Dev-Nutan) climbs up as friends but when they come down, they’re lovers.

The song Ek ghar banaunga had camera tricks – Nutan is seen in the glass of whiskey. Then Dev’s aide puts an ice cube into the glass causing Nutan to shiver!

Aaja panchi akela hai was filmed in a constricted space (a room and a toilet!) in Nau Do Gyarah.

Goldie’s creative picturisations took the story forward. He had once said, “My camera listens to the song and moves with it”. Long shots, lush backdrops and sharp contrasts brought out the poetry in the prose.

Goldie was undoubtedly among the best film-makers in Hindi cinema. In his three-decade-long career as a director, he enjoyed critical and commercial success. He should have been counted among the greats, but sadly, he is not. Individual directors may love him and his name crops up in occasional academic conversations about Hindi film, but unfortunately he is not given the respect accorded to many others.

Salute to one of the greatest director of Bollywood, Vijay Anand, Goldie.

Nicely worded tribute giving lots of information about the person. All the 5 films are great, but ultimate is GUIDE. Can’t remember how many times I have watched.

Superb Article. I have lost track of how many times I had seen (and still see) Guide, Teesri Manzil, Johny Mera Naam. Thanks for giving me a great Nostalgia Trip.

Excellent article written from the heart! But R.K.Narayan to my knowledge never approved of Guide the movie!

I wrote what I read about RK Narayan. But let me recheck what you are saying.