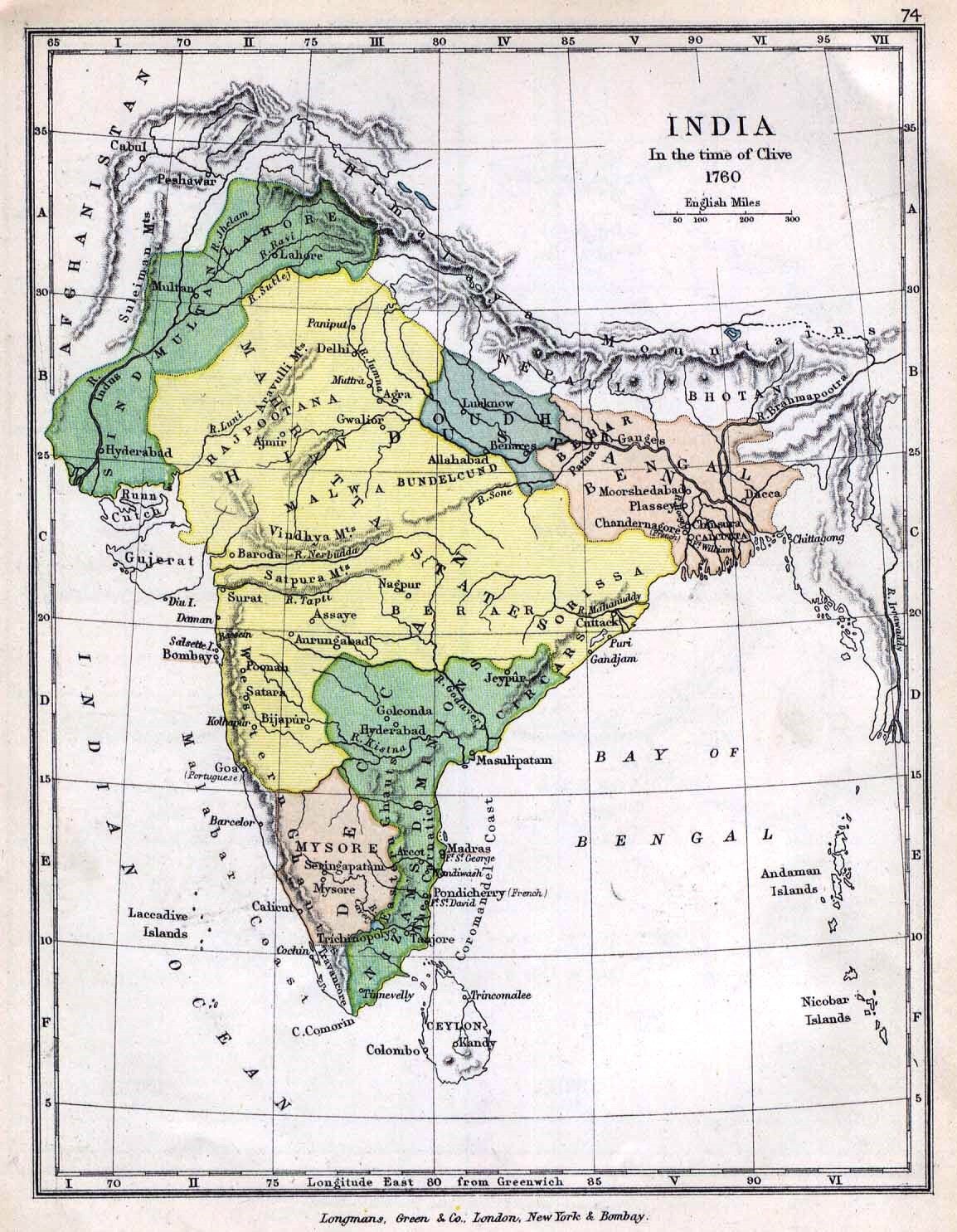 What I am going to recount is the factual history of the Maratha Empire.. Actually there will be so much to write about Chhatrapati Shivaji that I will have to pen a new article and I am not really competent enough to write about this towering personality.. His exploits such as Afzal Khan. Shahistekhan and escape from Agra is part of folklore in Maharashtra.. Hence I am only restricting myself to time chronology of the empire..

Shivaji Bhosale (1627–1680) was the founder of the Maratha empire.. Shivaji led a resistance to free the Marathi people from the Sultanate of Bijapur from 1645 and establish Hindavi Swarajya (self-rule of Hindu people).. He was crowned as Chhatrapati (sovereign) of the new Maratha kingdom in 1674 till his death in 1680.. The state Shivaji founded was a Maratha kingdom comprised about 4.1% of the subcontinent, but spread over large tracts. At the time of his death it was dotted with about 300 forts, about 40,000 cavalry, 50,000 foot soldiers and naval establishments all over the west coast..

His son Sambhaji was crowned as the new king in 1681 and ruled till 1689 when he was captured and executed by Aurangzeb..

Upon Sambhaji’s death, his half-brother Rajaram assumed the throne in 1689 and ruled till his death in 1700.. Then his widow, Tarabai assumed the control and kept fighting with the Mughals till Aurangzeb’s death in 1707..

After Aurangzeb’s death in 1707, Shahu, son of Sambhaji (and grandson of Shivaji), was released by Bahadur Shah I, the new Mughal emperor.. Shahu’s mother was kept as a hostage of the Mughals.. Upon release, Shahu immediately claimed the Maratha throne and challenged his aunt Tarabai and her son.. This promptly turned the now-spluttering Mughal-Maratha war into a three-cornered affair.. The states of Satara and Kolhapur came into being in 1707 because of the succession dispute over the Maratha kingship. Shahu appointed Balaji Vishwanath as Peshwa.. The Peshwa was instrumental in getting Shahu accepted as rightful heir of Shivaji and the Chhatrapati of the Marathas by The Mughals.. Balaji also got Shahu’s mother, Yesubai, released from Mughal captivity in 1719..

After Balaji Vishwanath’s death in April 1720, his son, Bajirao I, was appointed Peshwa by Shahu.. Bajirao is credited with expanding the Maratha Empire tenfold from 3% to 30% of the modern Indian landscape during 1720–1740.. He fought over 41 battles before his death in April 1740 and is reputed to have never lost one..

His son, Balaji Bajirao, known as Nanasaheb became the Peshwa in 1740 after the death of Bajirao I and ruled till 1761.. The Marathas were requested by Safdarjung, the Nawab of Oudh, in 1752 to help him defeat Afghani Rohilla.. The Maratha force left Pune and defeated Afghan Rohilla in 1752, capturing the whole of Rohilkhand (present-day northwestern Uttar Pradesh).. In 1752, Marathas entered into an agreement with the Mughal emperor, through his wazir, Safdarjung, Mughals gave Marathas the chauth of Punjab, Sindh and Doab in addition to the subedari of Ajmer and Agra.. In 1758, Marathas started their north-west conquest and expanded their boundary till Afghanistan.. They defeated Afghan forces of Ahmed Shah Abdali in what is now Pakistan, including Pakistani Punjab Province and Khyber Pakhtunkhwa.. The Afghans were numbered around 25,000–30,000 and were led by Timur Shah, the son of Ahmed Shah Durrani.. The Marathas massacred and looted thousands of Afghan soldiers and captured Lahore, Multan, Dera Ghazi Khan, Attock, Peshawar in the Punjab region and Kashmir..

Huge armies of Muslim forces led by Ahmef Shah Abdali and Marathas collided with each other on January 14, 1761 in the third battle of Panipat.. The Maratha Army lost the battle, which halted their imperial expansion.. The Jats and Rajputs did not support the Marathas.. Their withdrawal from the ensuing battle played a crucial role in its result.. The treatment of Marathas for their co-religionist fellows – Jats and Rajputs was definitely unfair in the past and ultimately they had to pay its price in Panipat where Muslim forces had united in the name of religion..

Nanasaheb’s son, Madhavrao I was the fourth Peshwa of the Maratha Empire in 1761.. It was during his tenure that the Maratha Resurrection took place.. He worked as a unifying force in the Maratha Empire and moved to the south to subdue Nizam and Mysore to assert Maratha power.. He sent generals such as Bhonsle, Scindia and Holkar to the north, where they re-established Maratha authority by the early 1770s..

The Maratha Empire, at its peak, ruled over a large area in the Indian sub-continent.. Apart from capturing various regions, the Marathas maintained a large number of tributaries who were bounded by agreement to pay a certain amount of regular tax, known as Chauth.. The empire defeated the Sultnate of Mysore under Hyder Ali and Tipu Sultan, Nawab of Oudh, Nawab of Bengal, Nizam of Hyderabad and Nawab of Arcot as well as the Polygar kingdoms of South India.. They extracted chauth from the rulers in Delhi, Oudh, Bengal, Bihar, Odisha, Punjab, Hyderabad, Mysore, Uttar Pradesh and Rajputana..

Madhavrao died in 1772, at the age of 27.. His death is considered to be a fatal blow to the Maratha Empire and from that time Maratha power started to move on a downward trajectory, less an empire than a confederacy..

Madhavrao’s younger brother, Narayanrao became the Peshwa for a brief period from 1772-73 before he was assassinated at the behest of his uncle, Raghnathrao..

Raghunathrao, younger brother of Nanasaheb, became the next Peshwa again for a brief period from 1773-74.. But he aligned himself with British which diluted the Maratha Empire’s power in North.. He was overthrown, by Nana Phadnis and 11 other administrators, by what is known as Baarbhai Conspiracy..

Then in 1774 an infant Madhavrao II was appointed as the Peshwa with council of ministers being in-charge.. This era, known as confederacy era, was dominated by Nana Phadnis.. During the confederacy era, Mahadaji Shinde (Scindia) resurrected the Maratha domination on much of North India, which was lost after the Third battle of Panipat including the cis-Sutlej states (south of Sutlej) like Kaithal, Patiala, Jind, Thanesar, Maler Kotla and Faridkot.. Delhi and Uttar Pradesh were under the suzerainty of the Scindia’s of the Maratha Empire..

Then Bajirao II became the Peshwa in 1796 and turned out to be the weakest of all Peshwa’s.. He mainly fought with British to keep the dwindling Maratha Empire from falling apart.. But the Third Anglo-Maratha War (1817–1818) resulted in the loss of Maratha independence.. It left the British in control of most of India.. The Peshwa was exiled to Bithoor (Marat, near Kanpur, Uttar Pradesh) as a pensioner of the British.. The Maratha heartland of Desh, including Pune, came under direct British rule, with the exception of the states of Kolhapur and Satara which retained local Maratha rulers (descendants of Shivaji and Sambhaji II ruled over Kolhapur)..

The war left the British, under the auspices of the British East India Company, in control of virtually all of present-day India south of the Sutlej River.. The British acquired large chunks of territory from the Maratha Empire and in effect put an end to their most dynamic opposition..

I will not be talking about the history of India post 1818 under British rule as it has been documented quite extensively..

Many of you might be wondering why have I written last 3 articles about History of India? I genuinely feel that we must learn from history and do not commit the same mistakes that we may have done in the past..

What set me thinking was why such a large Hindu majority country like India was ruled for nearly 750+ years first by Muslim rulers and followed by Britishers? What must be reason for such abject failure & surrender?

This is the tragedy of Hindus.. If we try to think through why such large Hindu majority subcontinent was subjected to slavery or bondage to be precise, there is one striking reason which come forth.. In nearly 500 years between 1175 till 1675, all Hindu kings and may be our ancestors used all their monetary and labour resources in building temples.. Barring few notable exceptions, nobody thought of fighting or rebeling against this Muslim bondage or slavery.. And the biggest tragedy is very very few kings other than Shivaji Maharaj, thought of building their own arsenal and armed forces.. Hence even if we think today what would have happened if Chhatrapati Shivaji was not born in this country, a shiver runs through the spine.. Hence, not only Maharashratians but we all Indians, must be grateful & thankful to Shivaji & later his Maratha Empire of 144 years..

But unfortunately we don’t seem to be learning from history even today.. If we travel to small villages, you may find there are no schools, no proper houses but all temples are to be seen to be believed.. Unless we break the shackles of the extreme religious superstitions, we can never progress as a nation..

The Hindus must see the dangers looming at the horizon and come together breaking all the destructive casteism barriers and fight those dangers unitedly.. Or else the great future for this country may just remain a pipedream..

Just now read your blog , very well written. Though we have studied the history in our school days , this is been penned in a very simple way avoiding the intricacies .
Keep it up Yashwant,
Never knew you had this quality .👍🏻👍🏻👍🏻

Thanks Prabodh. History used to be my passion in school but later it just died down. It has resurfaced again. Now I am seriously contemplating to some research by selecting some specific topic. There are some subjects in mind, let’s see how it goes ahead.

Super overview of history ! We feel proud to be Marathi !