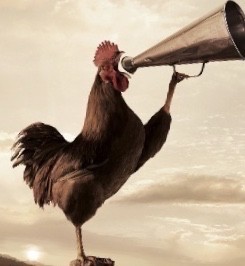 I am sure nobody remembers this. Today we can’t recollect something of the immediate past then who will remember something which has happened 50 years before?

There used to be Radio program known as Kohinoor Sarataj sponsored by Kohinoor Mills. It used to be broadcasted every Sunday and the format was like today’s Top 10. At the start of the program & before the No. 1 song of the week, the presenter (RJ in current lingo) would say those words and there would be a sound of crowing of Rooster. This was one of the most popular program along with Binaca Geetmala.

There were many prosperous mills in Mumbai in 1970’s. We used to feel amiss if we didn’t hear the sirens which used to blow exactly at 6.45 am, 7 am, 9 am and 11 am. These were the signals for the mill workers for their first shift, general shift & lunch time. During those times the watches were not automatic as they are today and they needed a winding to keep them running. Hence once in a while they would stop and then people would set their watch as per the siren of the time. This one example is enough to give you an idea how integral were the mills as a part of this city. How many people remember this history? Does anyone bother to find out what happened to that legacy of Mumbai (Bombay then)?

Anyone who has travelled by local train in Mumbai will feel sad about some structures as the pass by on their journey to Churchgate to CST – structures in ruins, empty remains of what were once livelihood of thousands of workers. And they look particularly haunted when the clouds of Mumbai’s monsoon cover them for hours at a stretch.

However during 1970’s, when we used to travel, we would witness buzzing areas of Byculla Chinchpokli, Lalbaug, Lower Parel, Worli, Delisle Road and Jacob Circle, known then as Giramgaon (literally means a village of the Mills) with the tall chimneys adorning the skies of Mumbai.

And who would have thought that when the British and the Portuguese decided to begin trade in India, the decision would become the very foundation of Mumbai city? Everything that Mumbai is today, is because of the trade & the push of industrialisation. The massive structures flourished and boomed, drawing in breadwinners from the hinterlands of India to work which earned the name Girangaon for this part of the city. And yet, today the mills remain forgotten, full of incomplete dreams and unfulfilled wishes. The walls of these once gargantuan structures remain in dispair today in the company of junkies, and perhaps occasionally witness couples whose stories will fade away with time.

Girangaon, which at one time had almost 150 textile mills, with the majority being cotton mills. The mills of Girangaon contributed significantly to the prosperity and growth of Mumbai during the later nineteenth century and for the transformation of Mumbai into a major industrial metropolis. Girangaon covered an area of 600 acres (2.4 sq kms), not including the workers’ housing. The mill workers lived in a community, and they fostered a unique culture which shaped Mumbai at the turn of the twentieth century. This textile industry flourished until the early 1980’s after which most of the mills were shut down, as the owners deemed them unprofitable and declared they were incapable of paying their workers’ wages.

Origins of the Girangaon:

The Bombay Spinning and Weaving Company was the first cotton mill to be set up in Tardeo, Mumbai, in 1856. A boom in the textile industry followed, with 10 cotton mills set up in Mumbai by 1865, employing over 6,500 workers. A gradual increase led to a total of 136 mills being set up by 1900. The textile industry was offered added government incentives in the form of long term leases (some of 999 years), as mills stimulated the economic growth and employment.

These mills were owned by former traders like the Tatas, Petits, Wadias, Currimbhoys, Thakerseys, Sassoons, Khataus, Goculdas, Cottons, and Greaves. Most of the mill workers came from areas around Mumbai – Kolis were particularly represented. The mill owners housed their workers in chawls built in the areas of Tardeo, Byculla, Mazgaon, Reay Road, Lalbaug, Parel, Naigaum, Sewri, Worli and Prabhadevi. These areas gradually came to be known collectively as Girangaon (literally “the village of mills”).

Both men and women worked in the mills. They would start working there at a young age (some as young as 16), and worked 12 hours a day (from sunrise to sunset) until the passing of the Factories Act of 1847 restricted the working day to 10 hours. When the Great Bombay Textile Strike was declared in 1982, there were an estimated 300,000 workers in Girangaon.

90% of the population who worked at the mills lived within a 15-minute walking distance of them. Most of the buildings were chawls; a survey conducted in Parel in 1921 determined that 27% of the population in Parel lived in rooms with ten or more people. It is also important to know how almost 10-15 people stayed in a 10X12 room. Each one had a trunk to keep their belongings & they used to rotate based on the shifts. Most of these workers were from Konkan region & from Ghat region of western Maharashtra. The Konkani manoos used to be more into semi- skilled areas whereas the sturdy Ghati’s were more into heavy work. However for most of them were used to be single with families nestled in their villages.

All such chawls were not built up by Govt or by mill owners. BDD & BIT Chawls were courtesy the government whereas mill owners of Kohinoor, Spring, Tata Swadeshi, Mukesh, Jam, Digvijay & Phoenix constructed chawls for their workers. And all other such tenements were on account of private developers. But no one paid much attention to the quality of the housing. In 1929, one chawl in Dadar was described as being a “dark, unwholesome den into which the light of day does not penetrate and which of necessity breeds disease and pestilence.” Often the rooms did not have adequate ventilation, and the lack of lavatory and washing facilities distressed the women in particular. The windows were kept closed to keep out the stench of the gutters and to keep dirty water from flowing into the house during the monsoon season.

Khanaval (खानावळ) was the mainstay of mill workers which fed thousands of such single labourers who were far away from their families. Few of the wives, who had moved with their husbands, used to run such Khanavals. The workers used to get unlimited meals twice a day by adjusting their shift timings. Their meal times were 11 to 11.30 am and 7 to 7.30 pm. Each such Khanaval would cater to around 100-120 people. This was an important source of income for those who moved in with families.

Due to this overcrowding, the distinction between home and street was blurred; Girangaon residents spent more of their time on the street than in the home. The gambling dens, illicit liquor joints and pathans waiting for collection used to be a usual sight.

There was great participation in communal festivals like Moharram, Ganesh Chaturthi and Gokulashtami. Local shop keepers and mill owners were often coerced into contributing to such festivals, and adjoining localities competed with each other in the grandness of their contributions. The local liquor shop or gymnasium was a common meeting place. The workers of Girangaon patronized arts like poetry, theatre and dance (tamasha). Several notable actors first found fame here.

At their peak in 1980, the mills employed 300,000 workers. Indian cinema of the 1980s and 1990s frequently drew themes from the life of the mill workers. However, the Great Bombay Textile Strike of 1982, triggered the end of the struggling industry. There are many people who tend to blame Union Leader, Dr. Datta Samant for his high headed attitude but in reality, he tried to dissuade the workers against going on strike. Though the mills started function after 18 months or so, ironically the strike was never officially called off and is in force even today. By 2007, only 25,000 people worked in the few remaining mills.

Even after 18 months of unsuccessful struggle, no concession given to the workers. It is a very sad story & plight of mill workers who became victim of selfish mill owners and dirty politicians. During the strike, people just struggled to survive. The gang war had its roots in this strike as many youngsters took to crime during that time.

Most of the industries moved away from Bombay and nearly 100 mills in Central Bombay were closed. The post strike era was a real estate story as Marathi manoos was truly uprooted from the Girangon. This resulted in the end of the textile industry in Bombay. Soon after, a significant chunk of mill workers and their descendants left Mumbai. They were the ones who bore the maximum brunt of the collateral damage arising from the changes in Mumbai’s economy. The leftover population & their next generation was trying to survive with any odd jobs. They were ready to do any menial jobs of helpers, peons to security guards with all their dreams vanished.

Those who are interested to know more about this strike, must read an article by Jayant Pawar published in Maharashtra Times on 18th January 2007 when the textile strike completed 25 years. It is titled “खच्चीकरणाची पंचवीस वर्षं”. Any sensitive person will be shaken to the core to know the plight of Mumbai Mill workers. The link to that article:

With the sudden change in Mumbai development, lifestyle needs, commercial skylines demand by corporates, the real estate growth at locations like Lower Parel soared and till date the development of residential and commercial skylines is at all time high but washing away the heritage and historic mills and their chimneys.

Strolling through Lower Parel, one can see the developed Mumbai with high structures and extravagant shopping malls like the Phoenix and the Palladium. With a gross floor area of about 365,000 sq ft, the surrounding compound also hosts a five-star hotel, a multiplex, commercial space and a residential tower. But Phoenix’s history dates back to 1905 and used to be the site of hard work and tool for innumerable working class people. Today, it is the space for the rich. Similarly, the well known Hard Rock Cafe in the Bombay Dyeing Mill complex is another such example. However Phoenix Mills happens to be one of the rare lands where essential structure of the mill has been retained and rehabilitated into luxurious shopping mall. But other like Kamala Mills and Elphinstone have not been that lucky.

It is interesting to see how these spaces have occupied the Mill buildings. There are no signs of its history, the people occupying the space have changed, the purpose behind these walls has changed. Wherein on the other side, the cracks on the walls still want to tell us a lot more about their history. Time changes people and places, however, memories never get erased. These walls wish to to narrate tales about their history, must never be silenced and it is upon us to preserve them forever.

I feel that ideal way is to develop theses lands should be redeveloped with keeping the original structure intact. It can also be developed as creative places by either making them into textile museums or converting them into recreational parks. The very foundation of the history of this city is being forgotten, and the need of the hour is to preserve it as much as we can before the next generation forgets it. This part of Mumbai is in dire need to be saved.