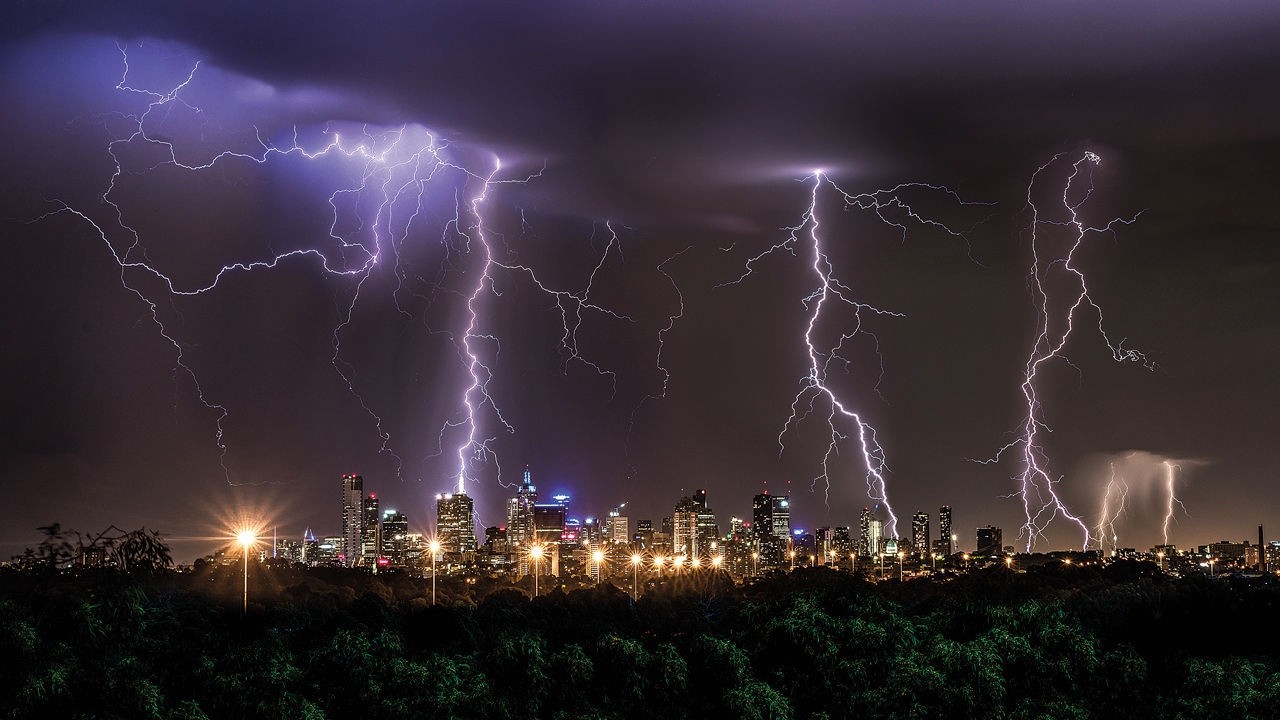 I was in US in June 1996 with our Marketing Consultant, Ashok for possible new marketing tie-ups in order to add to our product basket. We had mainly 3 cities to visit viz. Los Angeles, Tulsa (near Oklahoma City) and New York.

We finished our work in LA and took a flight to Oklahoma City via Houston on 24th June as there was no direct connection to Tulsa. Our connection from Houston got little delayed and we were near Oklahoma around 10 pm. Suddenly there was a announcement over the public address system that there is severe thunderstorm over the Oklahoma City and people sitting on the right side would be able to witness it. There were no digital cameras back then & hence couldn’t capture the nature’s fury.(The photos are courtesy internet.)

I have been always unlucky (or lucky) for not experiencing the nature’s fury of storm of any type (tempest, hailstorm, snowstorm or thunderstorm). And hence I had never seen such thunderstorm ever in my life and haven’t seen later as well. The whole city seemed engulfed in black clouds and we were able to witness unprecedented lightning. The plane hovered over the city for some time and it was not difficult to figure out that it would be impossible to land in such weather conditions. Sure enough, another announcement came that the plane is being diverted to, lo behold, Tulsa.

Our flight landed at Tulsa around 11 pm. The airports in western world and especially in smaller towns get closed around 9-10 pm. The airport ground staff was specially called from their homes to look after this emergency landing. By the time we landed at Tulsa, it had started raining quite heavily. The staff welcomed us all and handed each of us a can of coke and a packet of chips. Even before we could sit down little easy, there was further news that the storm is heading towards Tulsa. All of us were taken to a lower floor and were instructed to sit on the floor away from glass panes. Luckily for us, the storm didn’t actually hit the airport but just passed from close quarters. But that was enough to experience heavy rains, winds blowing at high speeds shattering few glass panes. The storm subsidised around midnight and we were told that the flight will head back to Oklahoma soon. Now even though we were in Tulsa, where we were supposed to come next day morning, we had no other option to get on the flight. We had no mobiles then and we wouldn’t have possibly called up the lady owner of the company at such odd hours.

The flight to Oklahoma was so bumpy that it was really scary. Since the distance between two cities was around 110 miles, the flight was for a very short duration. But because of bad weather, we were on tenterhooks all the way. We finally landed at Oklahoma around 2 am and reached our hotel around 3 am. Luckily for us, that particular hotel had someone in the reception to welcome us and allot the room. Else we would have been forced spend next few hours outside the hotel gate. Many hotels in US, even today, have no staff in the night. The company owner from Tulsa was supposed to pick us up from the hotel around 8 am as it is about 1.5 to 2 hours drive. We must have hardly slept for 2-3 hours and got ready.

Next day morning we told the lady about our last night experience. She kept saying, why didn’t you call me? You could have stayed in my house. We knew she was saying it for the sake of saying it. We couldn’t have done that when we didn’t knew the person at all and were meeting her for the first time. Our meeting was quite fruitful and we proceeded to New York on 25th June.

We landed in NYC and luckily the person who we were supposed to meet agreed to pick us up from airport. We went to his office at, hold your breath, World Trade Centre on some 44th floor.

The meeting went off quite nice which was followed by lunch at close by restaurant. Now we had completely forgotten that NYC is ahead of Oklahoma by one hour. Fortunately we realised that nick in time and literally rushed to the airport to catch a flight to Copenhagen via London. I never happen to visit NYC again for next many years and when I went back, the World Trade Centre was gone.

You might recall this is that famous return flight when our passports got stolen on London Heathrow Airport. It was as if the thunderstorm which we missed in Oklahoma hit us in London.

Good but frightening experience. You were lucky to experience but could escape by the grace of God. God bless you always.